Finishing Gabrielle Hamilton's memoir of becoming a chef, Blood, Bones & Butter, I am thinking about passion.

This is how Hamilton writes, and this is how she lives, passionately.  She is a chef.  She is a mother.  She is a woman.  Foremost, though, she is fiercely alive. Her gospel is hard work. (At one point she calls it "my Protestant dishwasher's mentality.)  This book is crammed with exhaustion and with determination.  She is never, no matter the situation, afraid of getting her hands dirty. (For a definitive example of this, read about her cleaning up the space that was going to be her now-famous New York restaurant, Prune.) 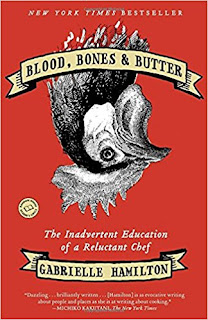 She's certainly not perfect. She can be bitter.  It's clear she can be difficult at times, and she doesn't concede a lot when blame is to be dispensed.

But she's resolute. Giving up is against her nature.  And she's a whirlwind.  The gusto, the energy she possesses, is scary.

This book is a pleasure to read, like one of the joyful exuberant meals Hamilton has in Italy with her husband's big family.  She writes with such verve, she can even make an early-morning train ride to speak to a conference with just four hours sleep, missing her young children, seem, somehow, exhilarating.  She's also one of the most informal narrators you'll ever encounter.  There is zero pretension from her.  She walks around casually, handing you a glass of wine, a joint, a bowl of something delicious.


In the end, I come away from reading this highly engrossing book—addictive, really—thinking that this is a person guided by passion, for better or worse, like a migrating bird's sense of direction.  It takes courage to live that way.  Hamilton is courageous.

I remember visiting a friend a year or so ago, an older woman in her eighties, who married young, an Irish Catholic from outside Chicago, steeped in the restraints of her religion and culture.  She had five children and spent most of her life raising them with a somewhat difficult husband.  We were sitting in her living room one afternoon, drinking wine, when she started tearing up.  I asked her what was the matter.  I don't remember what it was we were talking about, but I'm fairly sure it was just some kind of banter.

"So many people," she said, "have lived more interesting lives than I have."

How could I console her?  I said a few words, did the best I could.  But there was truth there.  I know, because I saw it in me.

Now, at seventy-two, with no idea how many more years are allotted to me, I wonder if I'll have the courage to live those years the only way they should be lived—with passion.

Posted by Richard Goodman at 7:06 AM