Tom Petty and a life

I finished watching Runnin' Down a Dream, the panoramic 4 hour 19 minute documentary about Tom Petty and the Heartbreakers, last night.

Not all in one sitting.

The 2007 film was directed by Peter Bogdanovich.  You know, The Last Picture Show guy.

I knew virtually nothing about Petty and his Heartbreakers before this.  His music was not a part of my life.

The film is thorough, if anything.  It mainly consists if concert footage and interviews with Petty, his band members, and various well-known musical figures.  It's not a great film, in my view.  And fours hours is a long time if you're not a rabid Petty fan.

But the film is curiously addicting.  Because of its length, you are able to really get to know Tom Petty.  And his career, which began in the mid-1970s, and continued until his death at 66 in 2017. 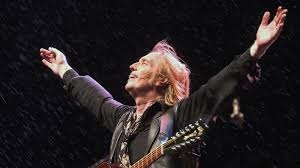 What I gathered after imbibing this much celluloid is that Tom Petty was one interesting, admirable guy.  Brave and a man of great integrity,

Thinking about it this morning.  Two things.  First, the influence of seeing the full sweep of a life.  Or a musical life, because there is almost nothing of Petty's private life in the film. One can assume this was deliberate on Petty's part.  The most affecting glimpse is the material about his mother and his cruel father.

You see a life unfold, decision by decision, resolution by resolution.  Petty twice fought the music industry in David vs. Goliath encounters, and twice he prevailed.  These were nasty and prolonged fights, not mere skirmishes.

Second thing.  Suddenly, Tom Petty is dead at 66.  Did he have regrets?  I have no idea.  But if the film is any indication, I would say: not many.

How much accumulating do I have left? Will it make a difference?

Posted by Richard Goodman at 6:44 AM No comments: