A walk in Charleston

I arrived in Charleston, SC—or nearby—Monday.  On my way back to New Orleans.

Went into the city proper yesterday.  I'd been on previous trips but wanted to see how it looked with this shitstorm we're facing.

Pretty place, early-19th-century century houses.  Enjoyable to walk, normally.  Scene of a monstrous church slaying in 2015.  Civil War started in the harbor.  I'm sure you know this.

The place was practically deserted.  Masks required, but half the few people I saw, wearing none.  Zero police presence, either on foot or in auto, to enforce.

The last time I walked here I had a companion, a woman I'd been with for three years.  My leaving her ached within me.  No place is the same if it can't be shared.  She liked Charleston.

She walked with me in my mind.  I pointed out things to her.  "Remember this house?"  Or, "I bought you a hat here.  You liked it so much."  We went to the harbor, in my mind, watched the birds.

As Dylan says: I threw it all away.

Even without her, it was sad walking the streets.  The life is squeezed out of the town.  Even towns can lose weight, become thinner, look wan.

I wanted to see one building, though, before I turned around.

The Old Slave Mart.  I'd been before, taken a tour, but wanted to see it again. 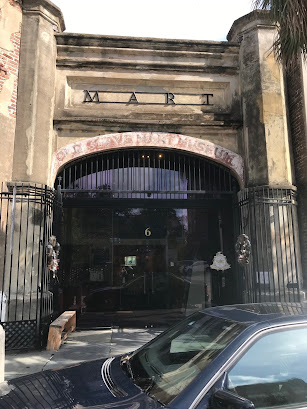 I stood before it.  It's odd, in a way, with a plate glass facade.  But the lettering above is not odd.  Reading the words "MART" on the building made the hair on the back of my neck stand up.  As well it should.

It's impossible to process, the fact of slavery.  As soon as I thought of what went on inside that building 165 years ago, my mind collapsed.

I walked away, interior fingers pointing at me.

Hardly any walk is simple, is it?

Posted by Richard Goodman at 6:02 AM 2 comments:

Notes on a courageous writer

She published a remarkable memoir in July, Notes on a Silencing.  The book takes place, mostly, at St. Paul's School, a storied, elite prep school for boys and girls in New Hampshire.  It's a dark story of violation, cruelty and betrayal that is as well written and stirring as any memoir I've read in years.

Crawford was 15 when she got a phone call one night from a boy at school she hardly knew.  He was distraught.  He said something had happened with his mother.  Would she please come to help.  She did.  That boy and another boy brutally raped her orally. She didn't know it then, but one result of this crime was she contracted herpes.

The book is the story of what happened before and after that night.

Lacy Crawford is able to describe the machinations, pettiness and outright cruelty that flows through prep school dorms better than anyone I've ever read.  Having attended one of these so-called elite prep schools for five years myself as a boarding student, I can tell you that she has perfect pitch when it comes to describing the particular form of cruelty that arises from youth who come from money and privilege.

There is not a single drop of self-pity in this book.  You, the reader, will supply the pity, the outrage, the anger and the sorrow as you read this story.  There is much cowardice here, not from the author, but from St. Paul's and its administration and teachers.  Not to mention lying and, as the title suggests, attempts by the school to silence Crawford.  If you're like me, you will bristle, react viscerally, to the wrongs done to her.  They start with the assault, but they by no means end there.

Despite the dark story, Crawford's writing can be funny at times, dry and sardonic.  She also quotes poets, a writer after my own heart.  Elizabeth Bishop's poem "One Art" gets her through some difficult times.  She quotes one of T.S. Eliot's Four Quartets at one point.  Anyone who believes in the guiding power of poetry will find evidence of that in Crawford's book.  If you find yourself stymied at times defending the arts, point the skeptics to Notes on a Silencing. 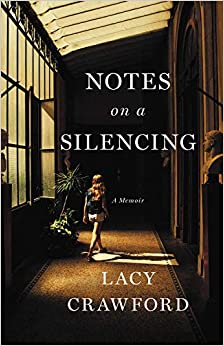 Crawford is wondrously adept with language.  She knows when the strong Anglo-Saxon word is required when writing about sex and when it just wouldn't be right.  She never spares herself in this tale and, to draw on an other poet, Theodore Roethke, she understands, as he writes, that nakedness is her shield.  Here I am, she says.  I'm revealing everything, my messy mistakes included.

Most everyone in the book is not kind to Crawford. "Kind" is a word she uses often, and kindness ranks high, if not the highest, on her list of admirable qualities in a person.  The few exceptions, the few people who are kind to her—a female chaplain, a boyfriend of a few months—bring much-appreciated light into this dark story.  Even a girl's brief arm around her shoulder is something Crawford never forgets.

The courage?  After having told her story many times to people who doubt her and even—of course!—accuse her of being at fault, Crawford decides, nearly thirty years after the events, to write about them unstintingly in a book.  She doesn't hold back on—anything. She's married now, happily, and has two small sons.  On day, they will read her book.  She know this, of course. Yet, she proceeds. It's a beautifully written book and a humbling experience to read it.

Posted by Richard Goodman at 6:13 AM No comments: