Garrison Keillor, when asked what book he felt was overrated, said, "'Winesburg, Ohio' by Sherwood Anderson."  He elaborated, saying the book "is pretty dreadful, and it inspired a whole lot of bad books about sensitive adolescent males needing to flee the philistines of their hometowns."

Well, Garrison, disagree with you there.  Not to mention there are moments when your Wobegon tales sound an awful lot like they take place in Winesburg.  Never mind.  Another story.

This story: Winesburg, Ohio inspired, and still inspires, because it's the truth. For those who haven't read it, it's a series of linked stories--was he the first to do that?--about a small, provincial Ohio town and its denizens.  Published in 1919.  One character, stand-in for SA, George Willard, appears in all the stories, sometimes fully, sometimes cameo.

Sidebar.  Anderson helped both Hemingway and Faulkner considerably.   He gave EH letters of introduction (to Gertrude Stein, for one) when H went to Europe as a very young man.  He got Faulkner's first book published.  Later, both turned on Anderson.  Jerks.  At least Faulkner apologized later.

Back to the book.  There's one haunting story that should be anthologized everywhere.  "Adventure." It's about a woman, Alice Hindman, who, when she was sixteen sleeps with a young man named Ned Currie.  She falls hard. Ned has larger ideas than the small town of Winesburg can contain.  He moves to Cleveland, vowing to send for Alice.  He never does.  She, though, never gives up, and, slowly and agonizingly surely, enters a fantasy world of her own making in which Ned will send for her any day.  Her behavior becomes strange. The story culminates in her stripping down and walking naked out into the rain in her small town.  She shockingly realizes what she's done, runs back inside, takes to her bed, and....the story ends this way:

“When she got into bed she buried her face in the pillow and wept brokenheartedly. ‘What is the matter with me? I will do something dreadful if I am not careful,’ she thought, and turning her face to the wall, began trying to force herself to face bravely the fact that many people must live and die alone, even in Winesburg.”

I know people like Alice.  I may be Alice some day.  Difficult to read.  True. 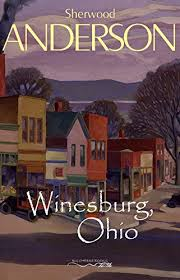 Posted by Richard Goodman at 8:25 AM No comments: