Ain't That a Shame


A great artist has died.

Fats Domino.  He was eighty-nine.  He was born and raised in New Orleans where, it so happens, I now live. There is a collective sadness coming over this city.

I have to take you back to 1955 in Virginia Beach, Virginia. That's when, as a ten-year-old kid, I first heard "Ain't That a Shame" sung by Fats Domino on the radio. No--wait. I bought the 45 rpm record! I can see it now. I played it and played it. I'd never heard anyone with such a honeyed voice. He made sadness sound sweet. He sang so pretty!

Then Pat Boone came out with a cover of the song. Do you know who Pat Boone is? He's the whitest white guy who ever lived. He took that song and turned it into Wonder Bread. Nobody had to tell me, a white kid living in the segregated south, that Fats was truth and Pat Boone was a lie. Every cell in my body told me.

Remember when this was. Mid-1950s. The guard was about to change from singers like Patti Page and Perry Como to Elvis, Jerry Lee, Fats, Chuck and Little Richard. Before. And after. My parents didn't let me listen to "colored music." (Yes, they said that.) Ha ha ha. All the kids did, on WRAP radio in Norfolk, the only black music station then. That's where we heard LaVerne Baker, Big Joe Turner, Ruth Brown and other exciting black singers.

Fats! Fats had a sweet, low down sound. He cradled you. He caressed you. He loved you. After "Ain't That a Shame," he put out "My Blue Heaven" (whatever that phrase meant), "Blueberry Hill," "Blue Monday" (I missed the blue theme he had going), "I'm Walkin'" (which Ricky Nelson messed up) and, of course, "Walkin' to New Orleans." And I can't forget "I Hear You Knockin'". All between 1955 and 1961.  I couldn't wait for a new Fats Domino single to come out.


I veered away from Fats musically in the 1960s. The Beetles arrived. Dylan. Stones. Hendrix. And so on. In 2005, though, Hurricane Katrina exploded him into my mind again. The storm took his neighborhood down. For a while, they couldn't find him, thought he might have drowned. But he'd been rescued, he was alive, he was ok. And there he was, in 2012, making a cameo appearance on the HBO series Treme. He looked frail. But he sang a bit of "Blueberry Hill," played some, too. And he sounded so pretty.

So sad to see you go, Fats. 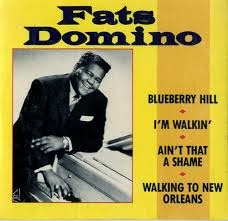