Look at this woman. 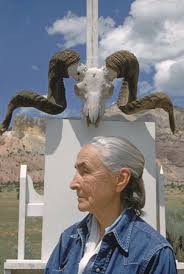 She always did, always could, look a person in the eye.


She had that essential rarefied beauty of the bleached skulls she loved to paint.

I'd like to have a face with that rugged simplicity in my very old age.
Posted by Richard Goodman at 8:20 PM No comments:

A day or so before the event, I was walking west on 52nd street toward Madison Avenue when, about fifty yards ahead of me, I saw a slim figure of a man get out of a limousine.  He was frail-looking, moved a bit unsteadily.  He was walking toward a small hotel near Park Avenue. Someone was by his side helping him.

There were people who had been waiting for him, it appeared, a group of bystanders.  When they saw him emerge from the car, they began applauding.  Not shouting or screaming, applauding.  I realized he must be someone famous.

He turned to them and smiled, waving a little shakily.  That smile.  I realized who it was.

It was Fred Astaire.

My first reaction was one of absolute, narcotic joy.  There he was! Astaire!  You couldn't mistake him.  He was smaller than I imagined.  He was never tall—only 5'8" in his dancing prime—but now, in old age, he surely had lost a few of those inches.  In 1982, he would have been eighty-three.

In my mind, of course, I—like everyone else—have the picture of this incredibly elegant dancer, the man who the great ballet dancer Mikhail Baryshnikov called "a genius," and—well, what can I tell you about Fred Astaire that you don’t already know?  And haven’t seen him do so wonderfully, particularly with Ginger Rogers, in his films again and again?

He looked, as I said, unsteady, as if he might fall.  He took his steps slowly.

Can you imagine?  Fred Astaire taking his steps slowly, cautiously?

But, like most of us, I'll always see him as the marvel he was.  And, as he sang so well, they can't take that away from me. 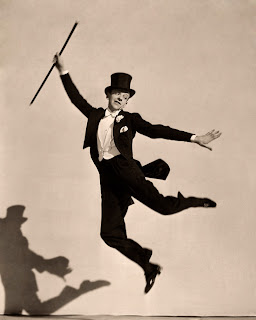 Posted by Richard Goodman at 6:27 AM No comments: