I'm sitting in a cafe in New Orleans called The Orange Couch. It's 8:28 in the morning. I have one of my favorite tables. I'm working hard. I will until I'm too tired.  The coffee machine hisses agreeably, infusing steam into jolts of espresso. The light pours into this small welcoming place. It isn't crowded yet. Many of the people of this neighborhood, called the Marigny, are not early risers. They're nocturnal. They start staggering in around 10am. There are only three of us here now. Other customers, smartly dressed, who have traditional jobs, come in, get their take-out concoctions, and briskly leave. 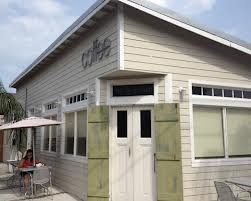 The cafe opens at seven in the morning. Sometimes, especially in the summer, when the New Orleans heat stalks you like a panther, I'm here just as the two narrow French doors swing open. Then, when I walk in, the place pristine and quiet, I feel like I'm the first one to dive into a David Hockney swimming pool. I have the whole morning ahead of me. The prospect is beautiful. On weekends, there's hardly a space to be found after 11am. The eight small white tables, two 1950s chairs and two couches—yes, one of them is orange—are filled to capacity. There are tables outside as well, six iron ones, and if this weather is good (and sometimes if it isn't), they're full, too. Royal Street passes right by the door. The neighborhood, except when parade season descends, is usually peaceful. Everything you could want.  In the winter, it's warm, comforting inside. 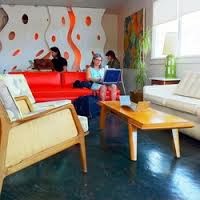 Fred, the owner, is here this morning. I've never seen him in a bad mood. He gives employment to many of those neighborhood artists, musicians and writers. Unlike the French Quarter, there aren't many places in the Marigny where a twenty-something can find steady work in such an agreeable place. There is warmth in his face. I look at him, and I think of Emerson's words, "A cheerful, intelligent face is the end of culture, and success enough." The dark-haired guy behind the bar who serves me my coffee exudes youth and promise. I see myself as a young guy in New York forty years ago. It's familiar. The way it should be. 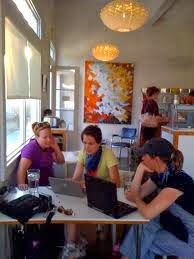 It's a place where I feel welcome, where I can stay at my table alone and never feel pressured to finish. I feel good here. I work well here. Finding a good place to work is always a gift, and I'm grateful. The Orange Couch is my Clean, Well-lighted Place. Thanks, Fred, as ever.