He was a small Italian-greyhound-like dog, who pranced when he walked and was scared of just about everything.  He spent half his life cowering.  He was one of those dogs, not quite as small as a chihuahua, but close, who had a sharp, loud, penetrating bark. Like those small dogs, you could see his rib cage moving like a bellows.  You couldn’t roughhouse with him.  He was a dog in miniature, too delicate and insubstantial to do medium or big dog things with. His slim legs were all tendon.  He was fast as the wind, and zipped about the house in excitement when you arrived home. He had a Linus-like old blanket he would crawl under and surround himself with in elaborate turns and twists.  When we would go out, he was put into a pen, which he did not like. Had to do this, or the house would be a wreck.  He knew when you were going out, and he would slink to the corner and try to flatten himself against the floor so as to make it as difficult as possible to pick him up.  But we always did.  In the cage he went.  He didn’t like it, but he had his blanket and would dig himself under that and disappear.  I wrote ANGOLA on a piece of paper and put it on top of his cage, which was appropriate since he was from Louisiana.  I made up a blues song that “he” would sing.  One of the lyrics went something like, “I been in prison for three long years….”  That would be twenty-one years in human years.  I thought that was an appropriate blues song for a dog.  Sometimes I would add, “And the warden done give me two more.” 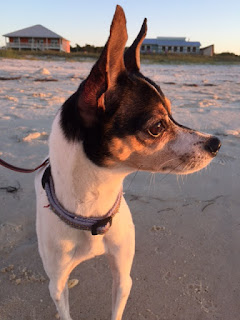 Like a lot of small dogs, he would bark ferociously at bigger dogs who could pop him in their mouth in one gulp if they chose.  When I would give him a bone, usually a lamb chop bone, he loved to tease and probe as if he were a surgeon, gnaw and chew with great serene, delight forever until it was a shadow of itself.  He was scared beyond reckoning of thunder, and he would howl pitifully until it stopped, shivering like he’s just emerged from an Arctic lake.   He had a personality, Jack did.  He was neurotic and slightly crazy and vulnerable.  He was so happy when you came home.  It’s funny how much you can miss a dog.

Posted by Richard Goodman at 7:29 AM No comments: