"Every breath is a victory!" Herbie Weitz said when I asked him how he was doing.

Herbie was a bookbinder who worked in New York City. He called himself "bookbinder to the stars." I met him about ten years ago when I did a profile of him for a magazine

He was a raspy-voiced showman with long curly gray hair and a thick New York City accent. He seemed to have a single topic of conversation: himself. The subject was endlessly fascinating to him.  A 1987 New York Times article about his bookbinding business called him "energetic and flamboyant." To say the least. He would have fit in perfectly in a Damon Runyon story.

"I've bound books for all the stars," he told me. "Some," he said, with great seriousness, "whose names I'm not at liberty to disclose. I've been sworn to secrecy."

I can't do justice to Herbie's multi-colored stories about his past, many of which seemed invented on the spot. He once said to me, "I tell you without any false modesty, I am the best bookbinder in the world. Living." We took a ride on the F Train deep into Brooklyn to his studio not far from Coney Island. I heard about wives, girlfriends, gangsters--he'd once run a nightclub for some less than reputable characters--movie stars and politicians. "I know everybody," he said straightforwardly.  "And they know me."

And the books he bound? I saw many of them. They were splendid.

I came back home after that dizzy day and began to write the article. I found I had a few points I needed clarifying, so I called him up. I asked him how he was.

"Every breath is a victory!" he said. It sounded silly to me, a bit like a slogan.

The article was published. I was good to him in print. About a week later, he called me up to tell me how much he liked it. He was extremely effusive.  "I am enjoying the recognition," he said.  He also said, "If you ever have trouble with anyone, I can help you with that. I've got friends" I politely declined the offer.  A month or so later, I spoke to him again.  We lost touch after that.  I asked him how he was, and, true to form, I heard him say,

"Every breath is a victory!"

Want to take out a loan of time so I can have some more to thank you for everything you've done.  For me, yes.  But far more for others.

So self-effacing you are, so modest.

If I were the great award giver, the great announcer of accomplishments, this is what I would say:

Tonight we are honoring Mary Downs, who has tirelessly, her whole life, put others before her, who has made the world a kinder more compassionate place, who has lifted us higher, who has showed us the better angels of our nature. 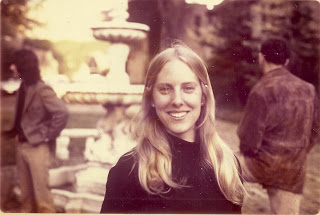 Gentle, kind and unstinting in your search to provide comfort and a haven to those, human and animal, who can't provide it for themselves.

Luminous spirit and soul.  I've learned goodness from you.  Or tried to.

Posted by Richard Goodman at 7:53 AM 5 comments:

Those first months in New Orleans, I was working very hard at the University of New Orleans so that they wouldn't uncover me and send me back to New York.

When I drove back in the evening to the French Quarter where I lived, I was too tired to fix myself dinner.  Instead, I went to the Verti Marte for dinner.  Or, rather, to buy my dinner and take it home.

The Verti Marte is a small market on Royal Street at Governor Nicholls, not far from where I lived at 729 Ursulines. It's a cramped place, as tightly laid out as a submarine.  Two people cannot walk down one of the two short aisles at the same time.  The food on the shelves is out of the "Leave it To Beaver" era.  Some cans and boxes I hadn't seen since I was a boy in the 1950s.

In the back, though, at a counter, behind slanting glass, are long rectangular stainless steel containers full of different kinds of food.

The Verti Marte!  It inspires a kind of lyric rapture.  I think about it and I feel like I'm Shelley.  I want to write a poem: "Hail to thee, blithe Market!"

And: the best meat loaf (called "Grandma's Boarding House Meatloaf") I have ever had the privilege to put into my mouth.  I can taste it now.  I can see it now.  I can smell it now.  I am like a Great Dane drooling now, lakes of spittle coursing down my chin.

And you get two sides. Lima beans.  Mashed potatoes.  Dirty rice.  Mac and cheese (outstanding). Broccoli and cheese.  Many more. 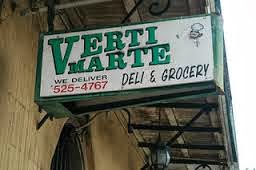 Behind the counter, Ken and Rikki.  They were welcoming, funny, attentive, inquisitive and helpful.  Everyone should make themselves a stranger from time to time to understand again how powerful these gestures can be to the heart.

I went back to 729 Ursulines, the box warm in my hands, the gorgeous smell wafting out.  Sat down, and, though eating alone, I was happy.

Rocked in the sweet arms of Verti Marte.
Posted by Richard Goodman at 3:28 PM 5 comments: