You know the story of Dr. Jekyll and Mr. Hyde? I never read the book, but I liked the 1941 movie version with Spencer Tracy very much, although it frightened me.  For years, though, the story seemed remote to me.  Until one day I realized that it's a story about alcohol.  A man, a perfectly respectable man, a doctor, drinks a serum he's invented and turns into a monster version of himself.  He has no scruples or conscience.  His basest instincts emerge.  His face contorts, becomes twisted, enraged.  He rapes.  He murders. 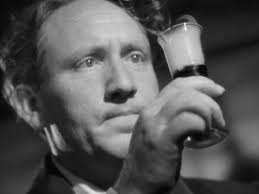 That face and figure of Dr. Hyde look nothing like the learned Dr. Jekyll.  But they're the same man. The drink wears off, and he becomes the respectable London gentleman Dr. Jekyll again.

This is exactly what happens to some people when they drink.  They become a completely different person, an ugly twisted version of themselves, who cuts, slashes, wounds and abuses those around them.  Or becomes embarrassingly maudlin.  Eventually they pass out, sleep it off, and become themselves—Dr. Jekyll—again.  If they remember what they did when they were drunk, they usually apologize, sometimes pathetically.  They're contrite.  But a lot of times, they don't remember.  And they don't stop drinking.

The damage, though.  The damage.

If you're a kid, and you see your father or mother turn into a person you don't know, who acts differently, who spits and snarls and accuses and rages and belittles, your world has no stability, there is suddenly nothing you can rely on.  Where did my mother go?  Where did my father go?


We all have our relationship with drink and drinking.

I have, as I'm sure you have, encountered nasty drunks—mostly men in my experience—who, with a lot of alcohol in their veins, unleash stabbing words, knowing exactly what your soft spot is, and going for it, like a hyena, ripping it open.  One former friend for years would get drunk and go for the soft spot so effectively it left you reeling or weeping or limp.  Nothing was sacred to him and his clever, hostile tongue.  Even my daughter.

I drink.  I've quit for a year or two from time to time, but I always pick up the glass of wine again sooner or later.  Mostly the things I do when I drink too much are stupid or rash.  I don't think I'm cruel. But the idea that with alcohol I unleash this different person with the same name is highly unsettling.

The next day, as my head clears, thinking of what I did or said the previous evening (if I can remember), I wonder: who am I, really—Dr. Jekyll?  Or Mr. Hyde?

Posted by Richard Goodman at 7:50 AM