My own private Dante

In the summer of 2011, I went to Rome to teach for two weeks. I came a few days early to acclimate myself and, in the airport, ran into a fellow teacher in the same summer program, Jody Lisberger. We decided to walk around Rome together. We went to the Piazza Navona and then wandered into the nearby Church of Sant'Agostino. Inside, immediately to our left, was a large painting titled "Madonna dei Pellegrini" by Caravaggio. Immediately the thought came to my mind,

"I wonder where the original is?"

I was just a few hours off the plane, remember.

We walked outside. Next door was the Biblioteca Angelica. A library. It looked fairly plain from the outside. I suggested we go inside. (Background: I was supposed to give a lecture on Dante as part of my teaching responsibilities.) I spoke some rudimentary Italian, a hodgepodge of opera arias and a few courses here and there. There was a man at a desk in an anteroom. I asked him if we could go inside the library. He said yes, just fill out this card. I guess that's standard around the world. I did, and we stepped inside to this: 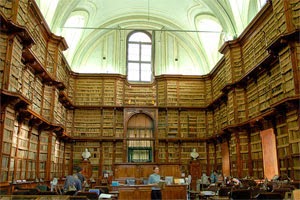 It was a book-lover's dream. It was like an all-you-can-eat literary feast. Those books! Row after row. Ancient, leather-bound books, reaching up into the sky. Look below—doesn't this make your mouth water? 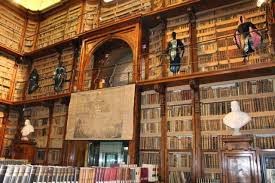 It did mine. I had to ask Jody for a Kleenex because water was cascading down the corners of my mouth onto the floor. I looked like a dog when you don't give it the treat right away. After cleaning myself up, I walked up to the main desk behind which three women were seated. I asked them in my pig-Italian if they had any copies of The Divine Comedy. All three of them smiled at once. "Si," they answered in unison. I asked them if they had some very old editions. "Si."  More smiles. Could I see the oldest edition? (Refresher: Dante wrote The Divine Comedy between 1308 and 1321. Gutenberg printed his first Bible in 1455.) "Si," they said.

In a few minutes, one of the women returned with a volume. She simply handed it to me. "I can look at it?" I asked. "Si." Didn't have to wear white gloves? "No." So, I just took it to a table nearby. And opened it. Jody snapped a photo. 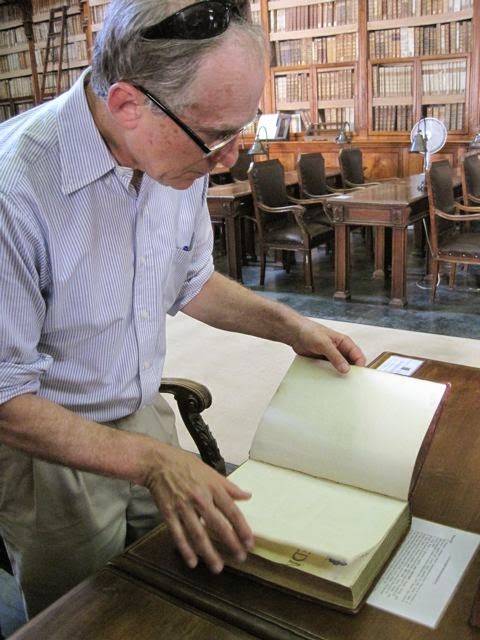 I didn't know what I was looking at until later. I could see that this edition of The Divine Comedy had been printed in 1472 in a town called Foligno by a man named Johann Neumeister. The name didn't have that Italian ring I was expecting. I reasoned he must be German (I have several Master's degrees) and that perhaps he had worked with Gutenberg (he had). What I didn't know was that this was the first printed edition of The Divine Comedy, anywhere.

I opened the book. 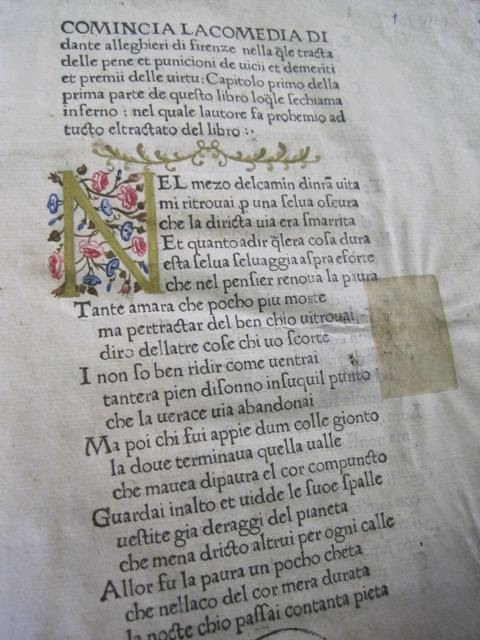 Well, Lord have mercy.  Let's get in a bit closer:

There are those famous Italian words, the most famous Italian words ever written, here put down in a kind of medieval shorthand, "Nel mezzo del cammin di nostra vita / mi ritrovai per una selva oscura / ché la diritta via era smarrita." As translated by Robert Pinsky, "Midway on our life's journey, I found myself / In dark woods, the right road lost."

Every time I read those words, I think: Haven't we all? I stood there and drank my fill of Dante. Satiated and stunned, I gave the book back to le tre donne gentili, and I left with Jody.  We walked back out onto the street.  The sun was full, glorious.

This was my first day in Rome.

Posted by Richard Goodman at 8:59 AM