Some people mourn movie theaters that have closed down. Some, amusement parks by the sea. Some, those old fashioned drug stores with counter service. Some, race tracks.

I mourn the passing of bookstores. I lived in New York City for thirty-five years, and I saw many of them close. Some of these privately-owned bookstores were marvelous, too marvelous for words. When they closed, it was hard on the heart. Take Books & Co., which was located on Madison Avenue and 74th Street. 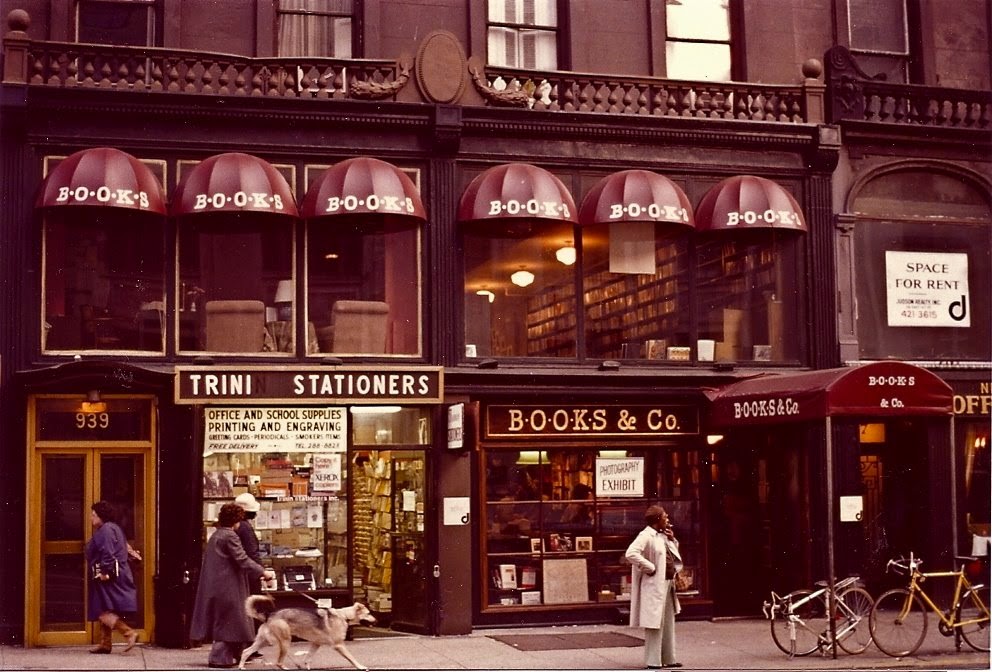 I wrote earlier about my sighting Allen Ginsberg emerging from that bookstore one day. The place was a two-story gem with rust-hued brick walls, one of which had an astonishing floor-to-ceiling selection that stretched on and on. Exploring that wall of titles, you felt like Howard Carter when he looked into Tutankhamun's tomb for the first time and was asked by those behind him if he saw anything. He replied, “Yes, wonderful things.” The place had a staff of seasoned book sommeliers who paired you with the right book for your particular taste of the moment. You could give them the barest direction, and they'd come up with something delicious for you. It was impossible not to make a discovery there.  I spent many happy hours in that store.

In doing some research for this post, I discovered that a book has been written about the store and its owner, Bookstore: The Life and Times of Jeannette Watson and Books & Co.  Who would have thought? I remember seeing Jeannette Watson, slim, with bright blonde hair, always dressed immaculately, obviously proud and pleased of her bookstore, as well she should have been. She was a hands-on, caring owner who, for twenty years, offered New Yorkers the most exquisite experience of the mind. As far as I'm concerned, Jeannette Watson was a saint, if there ever was one.


The store closed in 1997. Before it did, there were efforts to save it, but they were futile. It was learned later that Ms. Watson had yearly put about $100,000 of her own money into the bookstore to offset losses. The rent was too high, though. Remember the neighborhood, one of the toniest in the world. So, we lost it. But for twenty years, those of us fortunate enough to have lived in New York at the time, had something very special. And we knew it.

Gone, but to anyone who spent time there, surely never forgotten.

Posted by Richard Goodman at 7:39 AM