I've been in therapy, on and off, since the Cold War era.

I don't know how many therapists I've seen.  I would guess close to fifteen.  That sounds slutty.  But that's the way it was.  Each time, there was a good reason.  I was with a few therapists for quite a long time.  The longest, in New York City, a woman, around nine years.  She was expensive.  They all are, aren't they, but in New York, particularly so.  They almost have to be to maintain their collective reputation.  I used to joke about the woman I saw for so long.  I would say that one day walking by the Hudson River, I saw her in a big sailboat.  The boat was named, Thank You, Rich.

I can hear them now.  "How does that makes you feel?"

The first therapist I saw rescued me.  I know you've heard this before.  You may have even said it before.  But fact is, he did.  I was in college, down, down, down.  Possessed by demons.  (I've thought, from time to time, that an exorcism might not be a bad idea.)  A friend recommended this man.  I was terribly nervous.  He was a classic Freudian.  Lie down on the couch, facing away.  Whoa.  But I told him things that had been securely locked up inside, labeled, "Warning! Lethal, Disgusting, Only Me, Shameful, Do Not Repeat."  And lo--he didn't call the police.  He made me feel--human. 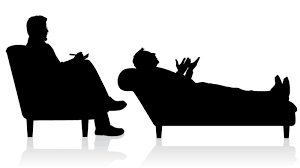 The therapists I've seen through the years haven't all been of the same quality.  But you could say that of car mechanics, plumbers or dentists, couldn't you?  Some I've seen briefly, to give me a new set of crampons to help climb a particularly slippery slope.  Then I'm off.  Some have been humorless.  Always a bad sign.  Some have been brilliant.  Some have been less than professional.  One cancelled appointments on a regular basis, not that good for the self-esteem.  Onward.

As the very wise poet, Molly Peacock, said to me once about seeing a therapist, "I need backup!"  Indeed.  Molly wrote a tender and loving book of poems about her therapist, The Analyst.  I guess this blog post will have to do for all mine.

I'm seeing a therapist now.  He's my backup.  And a good one.  He laughs at my jokes.  What's better than that?  After a lifetime of therapy, I've come to understand that I can't heal some of the wounds I had hoped to heal.  They are too profound. But I can become more aware, can hurt less, can do a bit better as a human.

So, all of you, every one of you, gather around.  Group hug.

Posted by Richard Goodman at 6:45 AM