My Road Trip with Michelle Obama 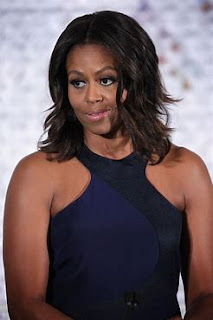 Michelle Obama and I took a 1700-mile road trip together recently. I don’t know about her, but I enjoyed every minute of it. She did most of the talking during the trip. All of it, actually. The conversation, if you can call it that, stretched over 15 states, from Louisiana to Maine, and took a total of 26 hours. All of it took place in my small car, a 2010 Ford Focus. You might think that in that tight space, over vast stretches on the Interstate, I might get tired of listening to Michelle Obama talk. But, no, I didn’t. She’s really a good companion. I didn’t know much about her before our road trip together. Other than, you know, what we all know about her. But on this trip, she really let her hair down. The stories she told! Who knew? I mean, when she gets started…! I said very little the entire trip. Once in a while, I’d laugh or smile or nod my head. Basically, it was all her.

I’m talking, of course, about listening to the audio version of Michelle Obama’s memoir, Becoming.

I could’ve chosen something “deeper” — say, The Brothers Karamazov — which I also have on audio but haven’t yet listened to. Or something that made me laugh out loud, like a David Sedaris book. I’ve listened to his audio books many times while on the road, and, I can tell you, they make the miles fly by. But I chose Michelle Obama’s Becoming. Why? Well, the reviews were excellent — “refined and forthright, gracefully written,” The New York Times declared in what is indisputably a rave. Not to mention the sales. Over 10,000,000, and counting. Recently, Timothy Egan added his praise in the Times, calling Michelle Obama “a luminous, observant, self-aware writer.”

But this was only partially why I chose Becoming to listen to for nearly the entire 26-hour car trip. I was curious. I wanted to know more about the person who had been First Lady for eight years — our first, and only, black First Lady, whose presence became so familiar to so many of us on an almost daily basis. Who is she, really? What did she really think about those unprecedented eight years and about being married to Barack Obama? Now that she’s not under the constant, all-seeing eye of the press, what would she say when given the chance? A lot, I was hoping.

Michelle Obama reads the entire book herself. I haven’t actually read the book, but I can’t think of a better way of experiencing Becoming than through Michelle Obama’s voice. There is something uniquely intimate and child-like about listening to an audio book on a long drive. It’s not radio, so the voice isn’t aggressive, pushy, loud. It’s someone telling you a story. It harkens back to sitting in a parent’s lap and being read to. Or, as an adult, to reading to your own child. Is there a simpler, lovelier connection? Is there a more wonderous way to pass the time than being told a story? And, yes, I believe that fact that Michelle Obama is a mother, makes that harkening back even more powerful. There was a certain sense of feeling protected, even loved, listening to her tell me her story.

When I started the audio book, the first thing I noticed, of course, was that voice. How integral it had been to our lives! Not as much as her husband’s — but close. And what a pleasing voice it is. It’s nearly impossible to describe a voice, and it may be not be necessary here, since we know Michelle Obama’s voice so well. But I can tell you it’s a voice that stands up well to listening to for vast stretches of time. Listening, I was reminded how important a voice is. I don’t mean the words. I mean the voice itself. A voice is as distinct as a fingerprint, and much more accessible and influential. It conveys much about the person. In many ways, it is the person.

So there we were, the two of us. I had Michelle Obama’s confident, vulnerable voice floating around me, for miles and miles, as exit signs and then state lines flowed by. She was there, keeping me company, as I drove from New Orleans where I live, through Mississippi and Alabama and into Georgia. She made me smile and shake my head as I drove through South Carolina, to Charleston, to spend a few days at a friend’s house. Her energy and earnestness kept me alert and content as I drove north through North Carolina, Virginia and, eventually to New York City, where I paused a few days to see my daughter. And she joined me, refreshed and lively, even as I was not, for the final leg through Connecticut, Massachusetts, New Hampshire and into my destination, Maine. Unlike me, she never got tired.

You know the voice. It’s been supplanted in our consciousness by another voice — not by the President’s wife’s voice, because we never hear that voice — but by the President’s bullying voice, which is like a breached dam, drowning everything. And, of course, Michelle Obama no longer has the wide-ranging forum she once had, so we don’t hear it that often anymore. It was good to have it back in my ear and head.

I had first impressions, of course. I liked the unadorned, practical, straightforward timbre in Michelle Obama’s voice. But what struck me after those hundred pages, and what continued to strike me, was the ordinariness of her story — until, of course, it wasn’t. There is nothing extraordinary about what she wanted from life and what her parents wanted for her and for her brother. Her parents worked hard to provide for their children so they could be raised without want and get a decent education. There is nothing especially extraordinary in her background. It’s easy to put yourself in lock-step beside Michelle Obama as she walks you through her life. Well, until her husband’s career explodes.

I don’t know what Michelle Obama feels is her biggest accomplishment, or what she is most proud of, but if the intensity of feeling that comes through in her voice is any measure, I would say it’s being a mother. The pure fullness of emotion that you hear in her voice is strongest and deepest, to my mind, when she speaks about giving birth, especially to her first daughter, Malia, and the love and responsibility she felt, and I’m sure feels, as the mother of her girls. This is something you can’t fully understand through one-dimensional words on the page, no matter how well-written they are. Intonation, inflection, nuance — they are there in her voice.

Single words and phrases are subtly or not-so-subtly emphasized and heightened, given their own hue. There is the absolute delight you feel when, over several chapters, she describes her almost helpless attraction to the smiling, super-confident, relaxed good man who would eventually become her husband. Try as she might — and she did try, because, at one point, she was his supervisor at her law firm — she could not resist him. As we listen to her getting to know this man who has a delightful swagger to him, and that smile we know so well, we learn why. She loves Barack Obama’s big heart, his ideals, his goodness. You hear the inevitability in the wry tone of her voice, a kind of “Oh, well, why bother to fight this” tone that made me smile.

When her husband decides he wants to become a politician, Michelle Obama’s greatest worry is what this will do to her family. We know, of course, this is not an unfounded concern. One of the shocks of the book that we share with her is the shock Michelle Obama’s feels once her private life becomes a public one. Nothing can prepare a person for this, and you can sense the bewilderment and the helplessness in her voice, the ineffectual protest, as this ravenous scrutiny from the voters and their hungry surrogates, the press, intrudes. She can’t protect her children, herself, or her husband from comments and accusations she never even had to consider before Barack Obama became a state senator, then a US Senator, and then President. This is the voice of a mother and wife trying to protect the people she loves, and she just can’t, at least not as she would have wanted. There is a sense of failure here, of even a mother’s fierceness being unable to shield her daughters and husband from danger, and who wouldn’t feel that? You do not doubt her sincerity. You hear it.

You can hear it clearly in the anxiety she has after her husband is elected President and she and her husband have to choose a school for her children. How will they contend with the special treatment they’re given, with the new celebrity and uniqueness? Their mother is well aware they didn’t ask for this.

Michelle Obama asked her mother to live with them in the White House. Reluctantly, her mother agreed. It’s fun to listen to her wryly describe her mother’s staunch determination to come and go from the White House, as she pleased, to meet friends for lunch and shop where she wanted to shop. When people came up to her and said she looked like Michelle Obama’s mother, her reply was, “I hear that all the time.”

I learned as much about Michelle Obama from her voice as she read her story as I did from listening to the words themselves she wrote. I’m sure I’ll never meet her. But that doesn’t matter. We hung out together for 1700 miles, just the two of us. We had a great time. It was enlightening and a lot of fun. I was sad to see her go when I pulled up to my final destination in Maine. I’d go with her on a road trip anytime, anywhere. Thanks, Michelle Obama, for coming with me.
Posted by Richard Goodman at 5:43 AM