Driving from Belfast, Maine back to Camden, I run into a sweep of fog.  I’d been driving through full sunshine up until then. My car climbed and descended a small hill, and there it was: a white presence drifting over the hills and the road before me.  The road is not a half-mile from the sea, so it makes sense.  Still, a surprise.

Fog like this—not obscuring the road completely for the foreseeable future and so not striking fear in a driver—is a delight.  Just enough white to be called fog and yet not enough to be perilous.   Fog can be treacherous, but not today.

The fog is delicate, snowy, insubstantial; yet it’s there.  I know it’s entirely water, yet, unlike water, how graceful and airy and white it is. 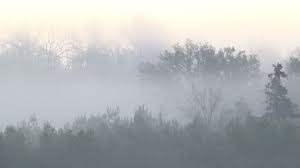 When fog moves, it often drifts, taking its good time, like a jellyfish being eased on by the current.

Sometimes, of course it stubbornly sits there, unmovable, the last person at the party.

After five minutes of driving, I’m through its presence and back in sunlight. Regrettably.

Was I seeing things?

Who knows why there was fog in just one short stretch of land and road and nowhere else?  There’s a reason, of course.  But I think if I knew that reason, the science that is, I’d be the less for it.

Leave me with my child-like wonder.

Posted by Richard Goodman at 5:02 AM