We began reading to our daughter almost as soon as she was born.

Her mother was a children's book editor, so she brought home scores of books.  Many I'd never heard of.  I really hadn't had much experience since my own kid days reading The Little Engine That Could a zillion years earlier.

I don't know of any child who doesn't like being read to.  I mean young children, who can fit easily in your lap or are alert in their crib when you start to read to them.

And I can think of few things I did as a parent that I loved more than reading to my daughter.

She was quiet, eyes following the pictures, listening to the words.  These were stories, and they held her attention.  More than that, they aroused her imagination.  And I was the one reading to her.  We were both in this together.  The idea that she could be so captivated, so enthralled by a book, that she wanted me to turn the pages, was simple and exciting.

I began to see her tastes!  She liked certain books more than others.  Why?  I didn't know.  It was just thrilling that she had preferences.  That spoke to her being an individual, which, in the end, was something so good to see as a parent.  Or it was for me, at least.

It's bedtime.  She's still in her crib.  So, maybe she's a year and a half?   I'm sitting in a chair next to her crib with a book. I lower the outside rail so I can show her the book more easily.  What is the book?  Let's say The Runaway Bunny by Margaret Wise Brown, the same person who wrote Goodnight, Moon.  I love this book, and I want my daughter to know the story.

She has the flaming-est red hair you've ever seen.  She's been fed, bathed and changed.  Essential needs met.  She's in her one-sy.  On her back.  All she has to do is look and listen.  And while she does, she does little things with her body, one of which is to put her foot in her mouth, which looks incredibly natural and even beneficial.

"Once there was a little bunny who wanted to run away," the book begins.  I turn the pages, one by one, and read the words, changing my voice and intonation to match the characters.  Then, at last, bunny reunited with his mother, I close the book.  "The end," I say.  I say this every time I finish reading her a book.  "Ok, sweetheart, it's time to go to sleep," I say. 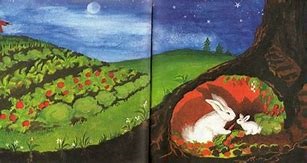 She doesn't look tired.  "Read another!" she says.

Posted by Richard Goodman at 4:26 PM