I'm writing about James Beard, because he was a wonderful writer who deserves to be known by all who love good food and good writing.

I'm worried that too few people know who he was, except as the name affixed to a coveted award.  He was a giant, figuratively and literally. He was born in 1903 and died in 1985.

He wrote over thirty cookbooks, and I have had a few through the years, but the one I've had for forty years and always return to with delight is James Beard's American Cookery.  Some of it is dated—he has over thirty entries for "Candy," for example.  But most of it isn't, and, more important, none of the writing is.  I have yet to find a writer who knows more about American food and its history than James Beard.  Each recipe is preceded by intriguing, highly informative prose about the dish and its background, often with a personal note.  Beard draws on an enormous store of cookbooks and writers, many I'd never heard of.  He seems sometimes to have one foot—maybe two—planted firmly in the early twentieth century—say, 1918.  I feel, sometimes, as if I'm sitting around a boarding house table with him, the table groaning with fresh stews, vegetables, breads, puddings and pies.  That would make perfect sense.  His mother ran a boarding house in Portland, Oregon.

He didn't have to learn about farm-to-table, because that's where he came from.  He only ate the freshest ingredients when he was a boy growing up in Oregon, and that's what he espoused from experience and taste.  His family took summer trips to the Oregon coast, and that's where he learned about seafood.  All of it fresh, of course.

I saw him once.  In Greenwich Village, where he lived.  He lived on West 12th Street, and so did I.  I'm surprised I didn't see him more often, but one day, I did.  It was in a little Italian Restaurant on Hudson Street, near Abingdon Square. 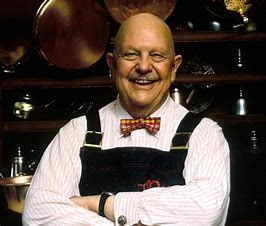 I must have been engrossed in my meal—it was a great little place, cheap with delicious food—because I didn't notice him when I walked in.  At one point, I looked up and I saw him from behind, that enormous bald head and equally large frame.  You know how you can identify certain people from behind?  I knew it was James Beard.  Of course, I also knew he lived in the neighborhood, so it made sense.  This would have been about 1980, so he would have been in his early eighties.  I was so pleased with myself for having seen him, as if I'd planned it.  I only remember hearing one thing he said, in a soft voice,

"Everyone knows I'm a pussycat."

Posted by Richard Goodman at 8:57 AM