There is a certain pleasure in reading a book about a subject that at the time was taboo, about a practice that had to be clandestine. You're a kind voyeur, looking into a forbidden world, and there is satisfaction in that, because you suffer none of the stigma of being a peeping Tom, since the author himself is asking you to peer inside.

This was the case for me when I read John Rechy's City of Night, a book about the underworld of homosexuality in America. The book was published in 1963.  I read it around 1968, fifty years ago. 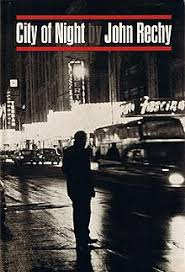 This book about a young man who travels across the United States encountering a variety of strange people, many of them gay, who you would never hear or see otherwise--at least not then.  Very few people were openly gay at that time.  Homosexuality was considered by many to be aberrant, sinful, not to mention illegal.  Many people--my father being one of them--were disgusted by queers, as he called them.  That word had no positive connotations back then.  No one was proudly appropriating it.

What books were out there about homosexuality?  There was Gore Vidal's The City and the Pillar (1948). There was James Baldwin's Giovanni's Room (1956).  What else?  The novels of Jean Genet.  The much earlier The Well of Loneliness by Radclyffe Hall (1928). Most everything else was underground.  There was really no such thing as mainstream gay literature.

Then came City of Night.

Rechy is a curious fellow.  Even as became famous with his book's success, he continued with his previous life.  He'd been a hustler.  Actually, he kept at it well into his fifties.  I didn't know anything about the author, though, when I read the book.

What happens when you read a book like this, about "a love that dare not speak its name," as the quaint phrase used to describe gay love, is that you feel just a bit complicit.  Hey, wait a minute, I seem to be enjoying this book a little too much.  Ever feel that way about a book about, say, a serial killer?  Or some kind of catastrophe?

It gave me pause, reading this book.  I learned a little something about myself, about the complexities swirling inside.
Posted by Richard Goodman at 8:40 AM