Their Journals, which they wrote together, are a delight to read, especially for a writer. They are chock-full of firsthand anecdotes about the era’s giant literary figures—Flaubert, Zola, Daudet, and so on. It was there that I read: "Flaubert told us that while writing the description of the poisoning scene of Madame Bovary, he had felt a pain as if he had a copper plate in his stomach, a pain which had made him vomit twice over." 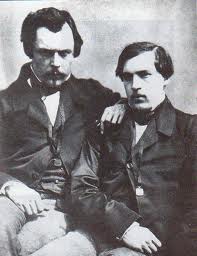 Everything was fine until Jules (on the right) became very ill, possibly with MS.  Gradually, he became less able to fend for himself. Starting in 1870, the Journals were solely written by Edmond. Jules was no longer able to write. On April 18th, Edmond wrote about his deteriorating brother:

"To witness, day by day, the destruction of everything that once went to mark out this young man…to see him emptying the salt-cellar over his fish, holding his fork in both hands, eating like a child, is too much for me to bear."

Then, this scene, which Edmond recorded on June 11:

"We had nearly finished dinner at a restaurant.  The waiter brought him a bowl.  He used it clumsily.  People started looking at us. I said to him rather impatiently: 'Be careful, old fellow, please, or I shan’t be able to take you out to dinner any more.'  He promptly burst into tears, crying 'It’s not my fault, it’s not my fault!' And his tense, trembling hand sought mine on the tablecloth. 'It’s not my fault', he went on. 'I know how it upsets you, but I often want to and I can’t.' And his hand squeezed mine with a pitiful 'Forgive me'.
"Then both of us started crying into our napkins in front of the astonished diners."

Though it wasn't old age that killed Jules, the gradual helplessness that comes with growing old, accompanied by the various mind-destroying diseases that many of will face, seems, from everything I've seen, exactly the same. I look to my past to see my future. Who will be there to be tender toward me in my decline?

Posted by Richard Goodman at 5:45 PM