As we all know, books can change lives. This is a case in point. When I found Women in Vietnam: The Oral History, edited by Ron Steinman, that's exactly what happened. I'd read quite a few books about Vietnam—the war of my generation—but I hadn't read a thing about the women who served there, most particularly the nurses. I stayed up half the night reading the testimonies of the nurses Steinman interviewed who served in Vietnam.  All the nurses' stories are stories of courage, but one nurse's story struck me especially deeply: Judy Hartline Elbring's.

Elbring volunteered to go toVietnam in 1967. (All nurses in Vietnam were volunteers.) She might have been shocked by what she encountered, but, as she told Steinman, "There wasn't time to be scared. There wasn't time to worry about anything except the immediate job at hand." 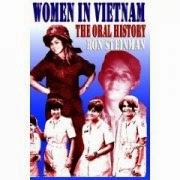 "To see a kid who's not that much younger than I am. He's my brother's age, and some of them are younger. They're eighteen and nineteen years old, and they're kids and they're skinny and they've been in the jungle too long and they haven't eaten well and the bones in their face show, and their uniforms are dirty and they smell bad, and now they're going to die.

"I remember after we were through work and had done all we needed to do, there would always be a few of them that were behind a curtain in the area where we used to keep them. I would go back there with them, and I would pet them until they died because, I was like their mother, their sister, their girlfriend. I would stay with them until they died, because too many of them died alone, and that's not right. That's just not right."


So some of you mothers who lost sons in Vietnam, know that it might be that Judy Hartline Elbring was there with your boy, easing him into his dying, helping him in his hour of being taken away, so that he didn't make that journey alone.

She came home. She wore her uniform, and she was vilified. So she stopped wearing it. "There was no one to talk to about this." Nevertheless, she went back for a second tour. Her brother, a marine, was going to Vietnam, and she wanted to be there in case he was wounded. He was, and she was able, because of her rank as a captain and simply because of her will, to be airlifted to his base and to take care of him.

She came home again. Then, the ensuing years. "I was just a nurse. I did my duty as I needed to do my duty. But what I didn't get was that I hadn't been welcomed home, and if that's important to me, it's got to be important for other women too. I had no idea this was still affecting me. I had no idea that not saying anything could carry this long a toll on me, on anyone. The part that scares me is, how many women are sitting on their anger, are sitting on their sadness?"

She ends her account with the picture in her mind of boy who died, a boy for whom she could do nothing. "He stays with me. I don't know why he stays with me, but he does. He comes back in my dreams. They're helpless dreams in a way. They're all the things I can't do anything about. I would love to be somebody's good dream. Oh God, wouldn't that be wonderful? I'd be very proud to be somebody's good dream."

I was so haunted by her qualities, I went and found her on the web. She lives in California, and she and her husband run an organization called Life Partners that helps couples with their relationships. I sent her a fan letter. She replied with a handwritten letter thanking me. So I had more than I ever could wish for: a letter from my new hero. I’m sure, through the years, she’s been more than one young wounded soldier's good dream.

Posted by Richard Goodman at 7:08 AM