The Courage of Thomas Lanier

I'm living in New Orleans, not far from where Tennessee Williams once lived.

He lived in several places in the French Quarter, and my current apartment is close to where he sets A Streetcar Named Desire.

I have always looked to him for courage, and now that I am growing old in his favorite city, even more so.

Every so often I pick up the marvelous biography of his early life, Tom: The Unknown Tennessee Williams.  It's a highly under-appreciated book.  I like to to read about those early struggles of his, many of which took place just a few blocks away. 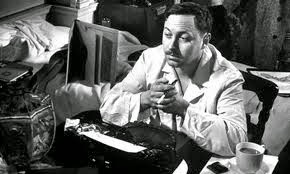 Brave and funny.  I remember seeing him on a Chicago talk show once with three or four other people.  One of them was a Catholic priest.  Tennessee had recently converted to Catholicism.  The priest, knowing this, said, "I shall pray for you."

Without missing a beat, Tennessee said, "I don't require your prayers."

Years ago, I read something he wrote in a preface to one of his plays: "...time is short and it doesn't return again. It is slipping away while I write this and while you read it, the monosyllable of the clock is Loss, loss, loss, unless you devote your heart to its opposition."

I can hear it, the ticking.

Give me courage, Tennessee.
Posted by Richard Goodman at 4:37 PM