We all need heroes

As a writer, I've had my share of dreams and fantasies. I've long since abandoned some of them--Nobel Prize, Pulitzer Prize, MacArthur Award and various other honors in a galaxy far, far away.

But then there are dreams and fantasies that may be highly unlikely, but not necessarily impossible. One of those is to tell my literary heroes (living, of course) how much they have meant to me. It's hard to describe how intimate a relationship you can have with someone you don't know when you're a writer. Those writers who have inspired you are often the only people who seem to understand what you're trying to do, even though you've never met them. They do, because, by writing, and by writing with passion and dedication, they tell you that what you're doing is worth it all.

Sometimes, they can even rescue you. Which is what happened to me. It was Laurence Wylie who did the rescuing. You probably don't know who he is. He wrote a wonderful book called Village in the Vaucluse about living in the South of France in the early 1950s in the hill village of Roussillon. Today, Roussillon is a hub of tourism, but not back then. Wylie went with his family to see what living in a small French village was like. The result is a sympathetic, fair, compelling and ultimately delightful book that takes the reader through all aspects of French village life, from birth to death.

So, how did Wylie rescue me? In the beginning months of living in my small village in the South of France, I was lost. I didn't understand a lot of the ways and means of the villagers. They weren't friendly. And they essentially didn't recognize me. I, of course, thought I would instantly become everyone's best friend. There were a lot of books in the house (owned by Americans, it turned out) I was living in, and one of them was Village in the Vaucluse. The landlady recommended it. I read it, and then everything was made plain. I saw my villagers in Wylie's book and understood I was no exception as to how they led their lives. I was fine after that.

When my book about living in that village was published, one of the first things I did was to send Laurence Wylie a copy in care of his publisher. Along with it, I sent a letter explaining how he had rescued me and how his book would live forever because it was true. I had no idea if he was even still alive at that point. It was forty years after Village in the Vaucluse had been published.

Then, one wonderful day, I received a handwritten letter from Laurence Wylie. This, in part, is what he wrote:

"Your letter was important to me because it helped me shove aside a sort of feeling that at 83 my life is dwindling without my having made a difference by living. Your letter made me feel that I had done something, so I thank you."

That was beyond great expectations.

Two years later, he was gone. But his book lives on, and I believe it always will. 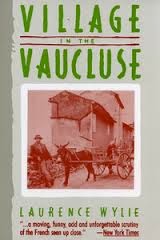 Posted by Richard Goodman at 8:13 AM