I was living in New York City. 1999. I wanted a dog for myself, but I also wanted one for my six year-old daughter, as well. I wanted her to live with a dog, to see how wonderful they can be, feel comfortable around dogs and to learn from them.

I got him from a small shelter. They told me Chester had been beaten by his former owner, a brute who lived in the South Bronx. When I first met Chester, he shivered and slunk. He lowered his head deferentially. His tail was as far between his legs as it would go. I'd never seen a dog so afraid.

I took him home. He sat in a corner. I told him about my daughter. I told him how beautiful and sweet she was, and how much he would like her and how much she would like him. I told him that we would both love him and that he would feel safe. He seemed to listen. When my daughter saw Chester for the first time, she was in heaven. It wasn't long before Chester lost his shyness and, as dogs miraculously can do, triumphed over his wounds. And that's how he entered our lives. He became Chester, the dog he was meant to be. He was as sweet as sweet can be, and everyone who met him, adored him. I tried to learn from his ability to forget the past. He was better at it that I was. But he was always there, with his dog smile and floppy ears, ready to tutor me.

And, yes, my daughter did learn to love dogs, one of the gifts Chester and I gave her that I am most proud of.  Because what creature gives more without taking than a dog?  What animal so readily and intimately teaches you more about the natural world?  And as a companion, someone who knows you and waits eagerly to greet you, who consoles you and never complains--you cannot ask for more.  I can still see my young daughter and I playing catch inside my apartment with a rubber ball.  Chester leaping high high high trying to snatch the ball out of the air as it arced above him.  Never tiring, almost getting it with that eager mouth until we finally took pity and threw the ball low enough for him to grab it.  Is there any fun as simple and exhilarating as that?

I had him for ten years.  You tell yourself, he won't age in that disproportionate way dogs do, but of course he did.  He grew old. It seemed impossible to me that this exuberant, playful dog would ever age. But he did.  And one day, a day seared in my heart, when he was too sick to enjoy life any more, I took him to the vet and came home without him.

It's been years.  I'm still trying to learn from him. 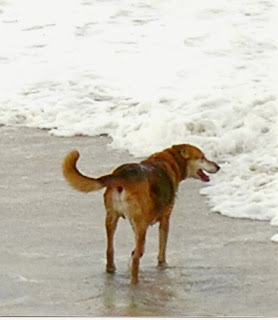 Posted by Richard Goodman at 8:19 AM No comments: