He was medium-sized mutt, about fifty pounds, with some obvious German Shepherd in him. But he had enough of other indeterminate breeds to cut the regimented ears and the black hair. He had flannel-like floppy ears and a tan coat that felt like soft bristles. He had a sweet, almost female face. I never had thought about a dog's face being either male or female, like a person's, but I do now. Chester was in fact mistaken for a female dog by people who didn't bother to look down below. He was pretty more than handsome.

I was living in New York City. I wanted a dog for myself, but I also wanted one for my six-year-old daughter, as well. I wanted her to live with a dog, to see how wonderful they can be, feel comfortable around dogs and to learn from them.

I got him from a small shelter. They told me Chester had been beaten by his former owner, a brute who lived in the South Bronx. When I first met Chester, he shivered and shrank. He lowered his head deferentially. His tail was as far between his legs as it would go. I'd never seen a dog so afraid.

I took him home. He sat in a corner. I told him about my daughter. I told him how beautiful and sweet she was, and how much he would like her and how much she would like him. I told him that we would both love him and that he would feel safe. He seemed to listen. When my daughter saw Chester for the first time, she was in heaven. It wasn't long before Chester lost his shyness and, as dogs miraculously can do, triumphed over his wounds. That's how he entered our lives. He became Chester, the dog he was meant to be. He was as sweet as sweet can be, and everyone who met him, adored him. I tried to learn from his ability to forget the past. He was better at it that I was. But he was always there, with his dog smile and floppy ears, ready to tutor me. 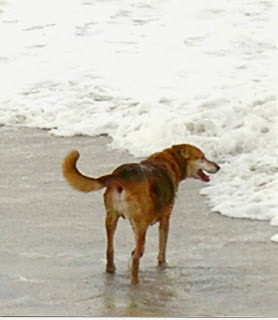 I had him for ten years.  You tell yourself, he won't age in that disproportionate way dogs do, but of course he did.  He grew old. It seemed impossible to me that this exuberant, playful dog would ever age. He did.  And one day, a day seared in my heart, when he was too sick to enjoy life any more, I took him to the vet and came home without him.

It's been almost seven years since he's been gone.  I'm still hoping to come home to him.

Posted by Richard Goodman at 5:48 PM