Allen Ginsberg taught me this...

I mean the actual Allen Ginsberg, not his poetry.

Allen--as so many called him--lived most of his life in New York City's East Village.  I never saw him there, although I lived in the same neighborhood.

Who in my generation wasn't startled and set on fire by "Howl"?  I loved that poem so much I taught my four-year-old daughter to recite the famous opening lines, "I saw the best minds of my generation destroyed by madness, starving, hysterical, naked...." My daughter actually did very well with it.  Much to the horror of her mother.

And I, like so many others, admired Ginsberg's guts, his fearlessness about standing up for what he believed in.

So, it was with great surprise and delight that one day I saw Allen Ginsberg walking out of the now-defunct (and oh so sorely missed) Books & Company bookstore on Madison Avenue.  This was probably around 1996, toward the end of both the store's life and Ginsberg's.

I was driving up Madison Avenue in my car.  As I rolled by Books & Company, I saw him.  Allen Ginsberg.  He was standing on the sidewalk, looking, I supose, for a cab.  You couldn't mistake him for anyone else. 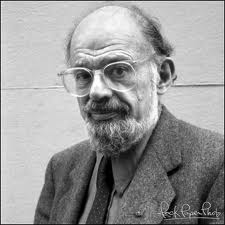 What did I do?  I slowed the car down almost to a stop, leaned out the window and shouted these profound words,

He looked here and there, not certain where the voice had come from.  Then he spotted me.  He looked at me and then said,

Indeed, so am I.  I may bitch about growing old, but I'm still here.

Posted by Richard Goodman at 6:53 AM