Because I'm not married, one of the things I'm going to miss as I grow old is wearing identical windbreakers with my wife.

I use to scoff at that. Seeing some snowbirds dressed in exactly the same style and color windbreakers. WTF?  I mean, isn't a couple two individuals? You wear different coats, hats, scarves, shoes all your married life. Then all of a sudden, you turn seventy-five, and you're Mr. and Mrs. I'll-have-what-she's-wearing. It just seems silly. It's not like you're in the army, or in a marching band, where you're all dressed alike for a reason.

You see them in grocery stores, in department stores, in movie lobbies. They have a sort of code, a verbal shorthand that they have created over thirty or forty years of marriage to navigate the routine of the ordinary. Sometimes they communicate with a glance. The windbreaker couples. Ha!

I began to have a vision. And that vision was my world shrinking. That vision was the world I used to move about in freely and participate in no longer had a place for me. That vision was that I will be squeezed out of that world and not allowed reentry. The new world I will occupy will be some kind of compound. And I will feel vulnerable in that world.

If I were married, I would want that world to know that there are two of us. We are coming at you, a team. It would be a sort of evolutionary defense: You look at us, and, because of the single color, we blend and seem bigger and stronger than we really are, like the big "eyes" on a moth's spread wings making it look like a fearsome creature. Think before you try to do us harm.

I can't say for sure why older couples start wearing the exact same jackets. It might be a much simpler reason. They do, though. We've all seen it. But I can say this. I won't be wearing an identical windbreaker with anyone. I'll be alone in my windbreaker. And I would give a lot to look silly. 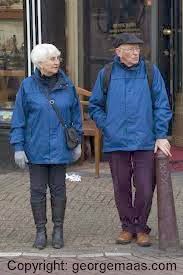 Posted by Richard Goodman at 5:27 AM