It snowed in New York City that Saturday. It snowed heroically. Some flakes were so large they seemed like rafts floating waywardly down. The snow didn’t stop. It continued hour after hour.

This was the great advantage of it snowing on a Saturday or Sunday. People never emerged that early in New York on the weekend. It wouldn’t last long, though. I had to get out if I wanted to have it mostly to myself. I walked outside from my apartment building in Greenwich Village. It was still early enough. The sidewalk and even the cobblestones were puffy white versions of themselves. Everything was doubled. There were only a few people trudging along in the dawnish drunken swirl here and there. I walked around the corner to West Fourth Street. When most people think of snow, they probably have a Robert Frost-like image of easy wind and downy flakes in the woods. I think of West Fourth Street. In just a brief length, between Seventh Avenue and West Twelfth Street in Greenwich Village. It passes by lovely, ancient brownstones and crosses some of the city’s most memorable streets: Bank, Charles, Perry, West 11th. It’s quiet. It’s fairly narrow. Trees line both its sides. It’s heaven in the snow. 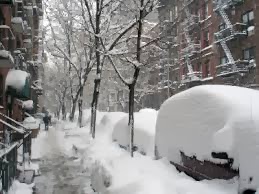 I walked along, my footsteps muffled, my progress slowed, my legs breaking trail. Just a few cars had gone by leaving perfect parallel trenches. It was so quiet. I could smell the snow. I could almost hear it. The parked cars had thick white blankets covering them. 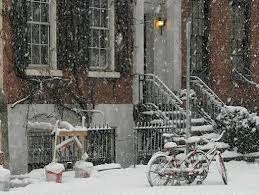 As I walked, I looked into huge brownstone windows to see life stirring inside. Some windows had curtains, some did not. I saw a woman in her robe pass by one window inside. A cat stared at me from the windowsill inside, its eyes following my every move. I could feel its warm comfort. I crossed a street. I was tempted to turn off and follow it. Every street was tempting. The snow that was stacked on the grates and plants and sconces went the very brim, waiting for that one addition of snow that would force it to tumble. But that hadn’t happened yet.  Everything was soft white perfection. I didn’t want Vermont. I didn’t want Robert Frost. I wanted this. I wanted New York.

Posted by Richard Goodman at 7:27 AM